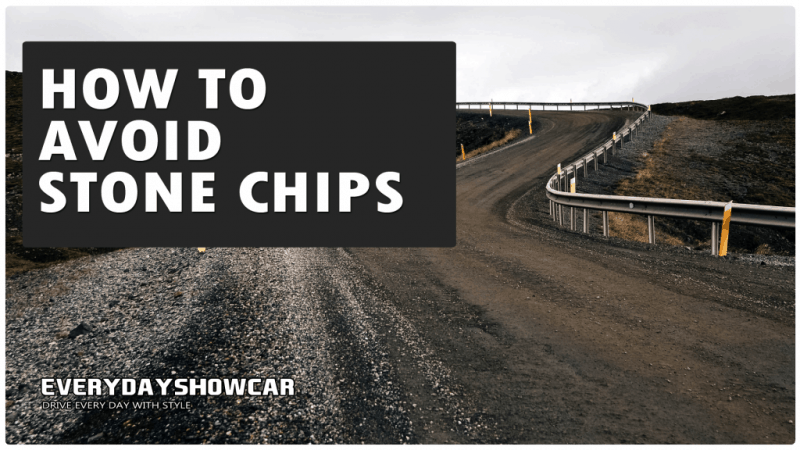 As a car enthusiast or someone that takes pride in their vehicle, seeing your car covered in minor imperfections can be frustrating.

Unfortunately, stone chips are a common occurrence and are here to stay.

Thankfully there are things that you can do to avoid stone chips, as well as methods to repair them and make them look better.

First of all, you need to understand exactly why they happen.

Stone chips are a result of gravel and general road debris being picked up by the tires of the car in front and flung towards your car. It’s for this reason people will tell you to avoid highway driving if you want to maintain factory-new paint.

The truth is, no matter which roads you travel, there will always be debris getting picked up by cars or flying around in the wind.

How To Prevent Stone Chips

The only way you can truly prevent stone chips is by investing a decent amount of money into your car. Buying a high-quality wrap will help to prevent stone chips from happening. The same goes for paint protection film, which is pretty much a clear wrap.

As you know by now, stone chips are mostly caused by rocks being thrown from the car in front. Because we know this, we can predict the part of the car that is most likely to be hit and cover them in paint protection film.

Paint Protection Film is pretty self-explanatory. It’s a thermoplastic urethane film that’s applied to the surface of your car. The process is very similar to wrapping a car, however, the film is completely see-through.

It’s probably the best way to protect the front of your car from stone chips.

The most common places to put paint protection film is on the bumper, hood, rocker panels, and fenders. Obviously, you can’t get PPF for windshields, but that would be great too.

Unfortunately, Paint Protection Film is super expensive. Unless you own a $25,000+ car it’s barely worth it, even then, you may just prefer to get the damaged parts repaired instead.

How To Avoid Stone Chips

Stone chips are a result of driving too closely to the vehicle in front of you as well as the types of surfaces you drive on.

Depending on where you are in the world, this could be easier said than done. However, whenever possible, keep your distance from the driver in front.

I know that sometimes people go slow, or you get over-excited, so you find yourself closely following the driver in front however, the less time you spend behind a vehicle, the less chance you have of adding new stone chips to your car.

If you were to look at the front of my car, you’d easily be able to tell my driving style. I’ve lost count of how many stone chips are in my bumper and I’m always seeing more whenever I go to wash the car.

Keep Your Distance From Big Vehicles

Expanding on the previous point, you should distance yourself from bigger vehicles as much as possible.

Bigger vehicles have larger wheels and are capable of throwing rocks much father.

On top of that, A lot of bigger vehicles or HGVs will have a dual-wheel setup, meaning that they cover a bigger surface area and are more likely to pick up debris and throw it in your direction.

To prevent this, mudflaps are required on larger vehicles however, they are low on the list of priorities for truckers. Next time you’re following a truck, pay attention to see if they have mudflats, a lot of the time they’re broken, poorly fitted or missing completely.

While it’s a requirement to safely secure loads on a vehicle, especially when they’re open to the environment, sometimes it’s done poorly.

If you’re following a car or truck with anything that’s light and can be thrown back towards your car in the wind, make sure to give it distance or try your best to get in front of it as soon as possible.

I don’t know how many times I’ve driven behind farm vehicles that have things falling out the back of them, in the best-case scenarios, it’s just a shit load of manure. But unfortunately, it’s normally things that can scratch and chip the paint.

It goes without saying, some roads are worse than others. This goes for potholes and it goes for debris too, a lot of the time, they go hand in hand.

Avoiding gravel roads and loose surfaces is a good way to limit potential damage, however, it could be completely unrealistic in a lot of cases. You’re not going to take a 3-hour detour just to avoid a couple of stone chips.

As always, make sure to keep your distance, though, you may find that stones are also being thrown at you by oncoming vehicles in the other lane.

As I mentioned earlier, a lot of the time, stone chips will be unavoidable.

Depending on where the stone chips occur, you may or may not have to deal with them.

If the stone chip happens to a plastic panel, such as your bumper, wheel arch trim, or plastic skirts, you will not have to get it treated as plastic panels don’t rust. Sure, it won’t look great, but the damage is purely aesthetic.

Unfortunately, if the stone chip occurs on a metal panel, they’re exposed to the elements and the surrounding paint may begin to bubble with the metal beginning to rust.

If this is the case, you can apply touch-up paint yourself at home. It won’t look 100%, however, it will stop the area from rusting, preventing the damage from getting worse, and reducing future repair costs.

Before you do this though, consult local body shops and even online businesses to get an idea of the price to repair as well as other actions you could take to protect the panel in the meantime