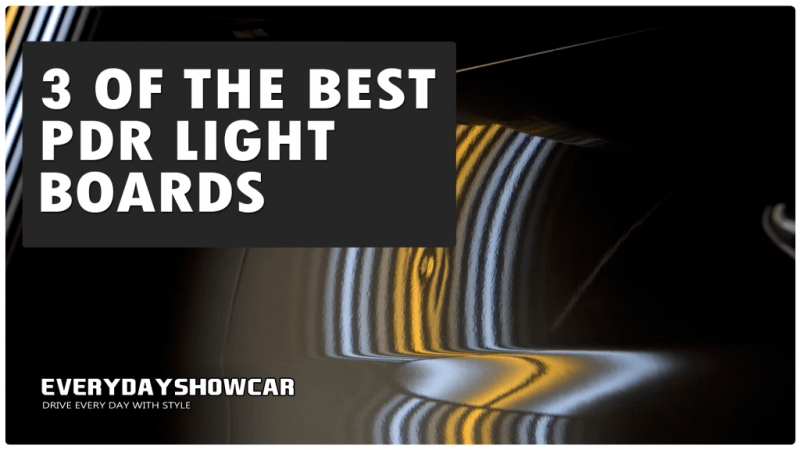 The only problem, especially for beginners, is that these can set you back as much as $400. It’s a huge investment for someone just starting out.

In this article, I’ll tell you about the best reflector and light boards you can buy. There’s a board for every budget, so no matter where you’re starting out, you can start strong.

how to use A pDR line board

The ultimate aim of PDR is to remove the dents without the need for paint refinishing.

Most technicians will try their best to repair the area without having to tap down the area. It results in a cleaner finish and also takes less time to complete the job.

If you can repair dents without the need for a tap down tool, you’ll do very well in the trade.

Using a line board with a good reflection is key. A good board will allow you to remove the dent and keep a clean finish without any extra bumps or high spots.

When it comes to light boards, because they’re so expensive, you want one that can last.

Cheap PDR Reflector Boards tend to lose suction and full under the weight of the board. If you shop in the $200-$400 range, this will not be a problem.

There are definitely cheaper options, but you have to be realistic in the sense that you’ll probably have to upgrade relatively quickly, especially if you’re trying to perform PDR for money.

JMgist LED Stripe Line Board is the cheapest item on this list. It comes in under $50 and is perhaps considered “the best of a bad lot”.

If you’re just getting started out, there’s no doubt that this will offer you a good enough reflection to let you learn, but may get tired quickly.

Yes, it’s LED, Yes it will light up on the car, but still, you may find it only slightly better than those paper line boards you’ll get in a DIY Dent Repair kit.

One thing that I really like about this is the fact that’s USB. This means that you can plug it straight into any modern car, you could also plug it into any USB cigarette adapter making it work on older vehicles.

The boards also double-sided, meaning that you can choose between white and black lines, or yellow and black lines. Switching between the two based on the brightness and car color will help you to achieve a smooth finish on every repair.

For the price, it’s definitely a good entry-level light board. That being said, If you can, I’d save up money and try for one of the more expensive boards that I’ve listed below.

If you haven’t heard of DentMagicTools, where’ve you been?

DentMagic Tools is a PDR Retailer and they’ve offered the largest and best PDR Tool selection for the past 25 years. Anything you need, they’ve got it.

Over the years they’ve also focused on creating and providing high-quality products for PDR technicians to use. This really shows in their PDR light boards, where they’re considered one of the leading manufacturers.

In regards to price, the PC LED 130 Board comes in around the middle of the market. It’s the first step towards owning professional gear and will continue to come in use later on, even after upgrading.

Because it’s a portable board, they’ve decided to use a cigarette lighter, plug it into the car you’re repairing, or even your vehicle and you’re good to go. It also comes with an adapter that will allow you to plug it into a regular socket if required.

I love the customization on offer, you are able to turn each line on and off with their own individual switches, this will allow you to tackle dents in ways that no budget board would allow.

As well as that, you can easily remove and replace the suction cups. This is a massive benefit, and increases the life-span of this product by years.

For around $200, this is a great board. It reflects well, is from a trusted PDR brand, and will last for a very long time.

You can buy the PC LED 130 From Amazon.com

The PC LED 220 is the before mentioned 130s bigger, better, sturdier brother. It still comes with the 3 switches to control which lines are on or off, it’s still portable, and it still reflects just as good, if not better.

The 2 main differences between the 130 and 220 is the fact that this one is battery powered by 20v Dewalt Batteries, it’s also way bigger coming in at 20 inches. Does that make it worth twice as much? That’s for you to decide.

There’s absolutely no doubt that a cordless light is much more convenient and being able to rotate batteries in seconds makes it very easy to use.

That being said, with the batteries, you’ll have to pre-charge them and make sure they’re ready for your next job. If you want to buy a 2nd Dewalt Battery, it could set you back a fair chunk. Depending on the type of person you are, you could also forget to charge the battery.

While I’ll admit the build quality has certainly improved between the 2 models, and the convenience is nice, the 130 may still be a better option for some.

Take a while to think it through. You may not want to spend twice the price for cordless features, better build quality, and a bigger board.

Whenever you’re ready, click here to check the price on Amazon.com