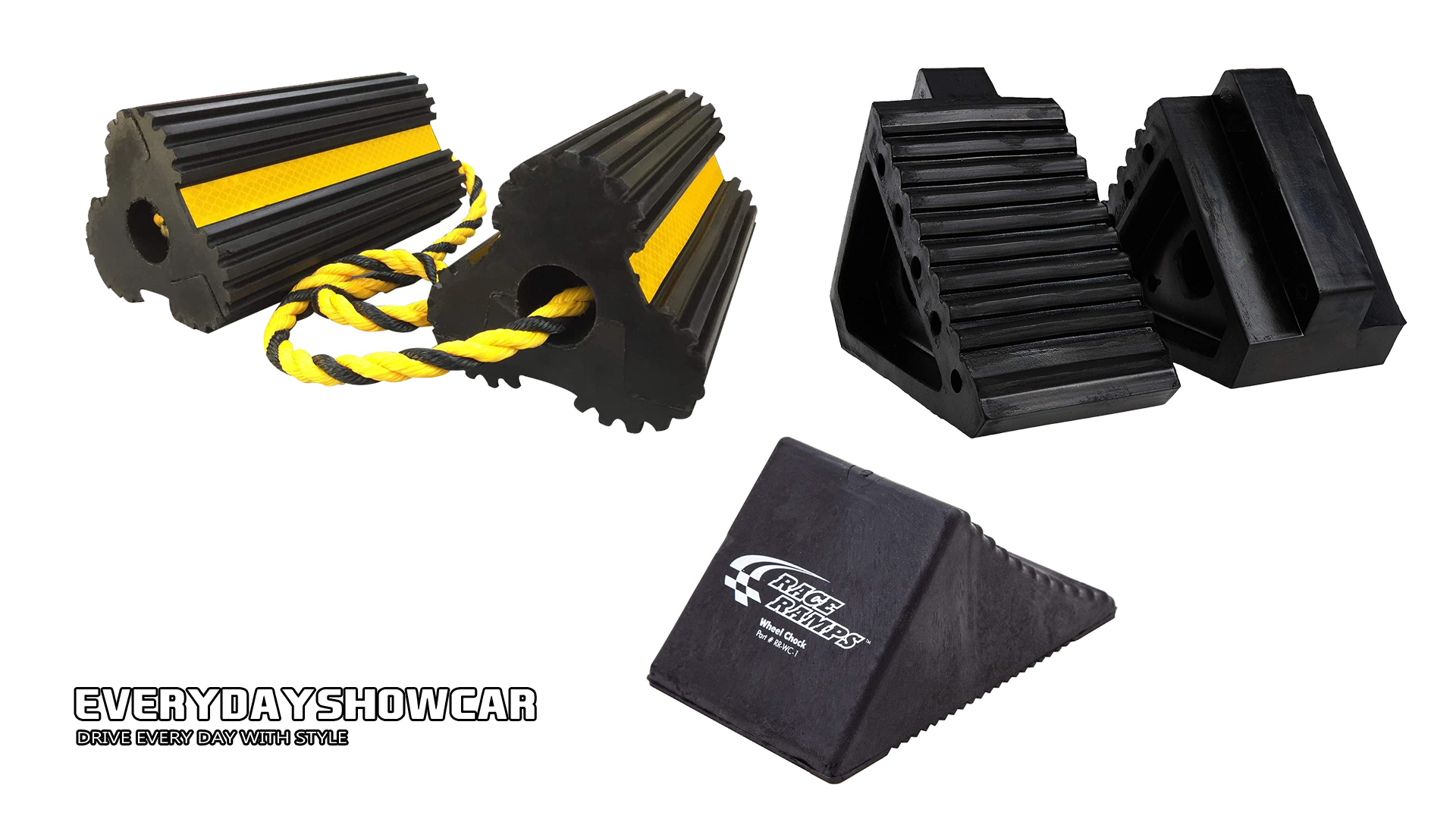 A lot of people overlook wheel chocks but they’re a great piece of equipment that can potentially save your life.

Whenever you’re lifting up either end of a vehicle using a floor jack, you should place wheel chocks under the wheels that remain on the ground.

Many people are too lazy or just down want to buy a set because they cost money and take up space. Yet, there are many high-quality wheel chocks at very cheap prices.

When you compare the price of “the best wheel chocks” to potential deadly scenarios, you can see why I swear by them. Why wouldn’t you spend 10 or 20 bucks to save thousands or even a life somewhere down the road?

The best wheel chocks you can buy, are ones that sit under the vehicle safely, completely locking it in place. They don’t need to be anything fancy, as long as they prevent the car from rolling. They can be as cheap and nasty as you like.

Wheel Chocks are made out of various materials, I believe that rubber ones are the best. This is because they stick to the surface much better but they’re harder to remove once you’re done with them.

You are able to get metal, plastic and wood chocks, which work in the same fashion, but I always fear they slide. You’ll probably also find that they deteriorate quickly over time. Especially if you’re not looking after them properly (corrosion on metal for example).

Wheel chocks also come in different shapes and sizes. The general idea is that you use wheel chocks that are at least 25% size of the diameter of the wheel. Using the right size is crucial to make sure the vehicle stays still.

That said, you do get ones that are marketed specifically for each type of vehicle, say cars, vans, trucks, motorbikes, and so on.

As for the shapes, there are a couple of different designs to choose from. The most common wheel chocks are wedges, but you also get C-shaped chocks and plain old blocks.

I personally prefer the C-shaped ones, but the wedges are just as good. I’m not a fan of using blocks, but they’ll work better than nothing.

Listed below is what I consider to be 5 of the best car wheel chocks on the market.

I’ve included wheel chocks at all price ranges meaning that you can prevent your car from rolling whether you have $5 or $50.

If price is no concern I recommend the heavy-duty Roblock Wheel Chocks that come with a nylon rope. They’re also multi-function and even work on airplanes.

The Camco wheel chock is on this list for one very simple reason. The price.

Camco’s wheel chocks have over 10,000 ratings on Amazon and managed to keep a 4 and a 1/2 star rating. They’re advertised as trailer wheel chocks but can be used on cars and wheels up to 26 inches.

While they’re not the most complex piece of equipment, they’re enough to get the job done. As long as you follow the manufacturers’ recommendations and use the equipment properly, you shouldn’t have any issues.

The main issue people face when buying these chocks is that they try to chock something that’s too large or too heavy for them. I’ve also read reviews complaining that they only work when fitted snug (that’s how chocks work).

If you are going to buy these chocks, they’re not meant for long-term use. Ideally, you’d use them as a short-term solution and upgrade later on. Because of the plastic material the weather and the way you store them will dictate how long they last.

Camco even has an expiration date listed on the chocks. I recommend paying attention to this date and replacing them if they begin to look faded, weak, or brittle.

You can buy the 2-pack for <$10. The only way you can get wheel chocks any cheaper is to make your own.

I will admit, I’d probably spend a little bit more money and get the ones with the rope. It’s much easier to remove the chocks from under your wheels when using a rope. Otherwise, you’ll have to hammer them out and risk damaging your wheels.

The wheel chocks that I’d buy if money was no issue is the Roblock Wheel Chocks. These cost more than the Camco options but are better and more user-friendly.

What I love most about these wheel chocks is that they’re connected by a nylon rope. This means it’s super easy to chock and unchock your vehicle, even if it’s of the larger variety.

If you’re working on a super big vehicle and the rope is too short to fit around your wheels, you could cut it and create 2 separate chocks. It’s completely up to you.

There’s also no expiration date on these. This is because they’re made of a heavy-duty rubber that’s durable and made to last. Despite the fact that they cost more upfront, not having to replace them every so often is a big positive.

Roblock also claims that they’re anti-slip. Being made of rubber, they’re certainly less likely to slip than plastic ones. I’ve not had any personal experience of working with chocks around oil or water because I work indoors and in a clean environment.

Roblock doesn’t state the largest wheel size, but they do suggest that the chocks will work on cars, trailers, RVs, Trucks, and even small aircraft.

The main reason not to buy these chocks is probably the price. They come in at almost 3x the price of the Camco chocks and depending on the work you’re doing, you may need to buy multiple sets.

If you’re going to use chocks often, I can’t recommend these enough. But, if it’s more of a one-and-done situation, stick with Camco or even making your own.

I believe that the Maxxhual heavy-duty wheel chock is a great middle option. They’re not too expensive, are super durable, and certain to last.

The general rule for wheel chocks is that they should make up at least 25% of the diameter of the wheel. The Maxxhaul heavy-duty chocks are 8 x 4 x 6 and work perfectly on cars, trucks, and trailers.

Like the roblock chocks, these also work in all-weather conditions. If you’re working out in the rain, you don’t need to worry about your vehicle rolling, rather finishing the task at hand before you get soaked.

What I like about these chocks is the rubber handle that’s located on the back of them. This makes it much easier to wedge them underneath your car. You can also tie your own rope around the handle to yank at when removing them.

As far as wheel chocks go, I can’t really find any faults. Other than the ridiculous odor that comes from them.

I’m not the only one that’s found the odor to be an issue. The amazon reviews clearly state the incredible rubber smell that comes from them. As long as you’re keeping them out of the house, or confined spaces, it shouldn’t be too much of an issue.

Overall they’re super sturdy, will last for a lifetime, and can be used in many applications. Simple and effective. What more could you want?

Despite wheel chocks being a simple piece of equipment, a lot of thought goes into designing them.

Another great design feature is the ribbed and textured base. It is designed to grip any surface that it’s on, regardless of the weather or contaminants on the surface.

And finally, the “EZ Handles” that can be used as handles to wedge and release the chock. While these handles aren’t the best, like the Maxxhaul chocks, you can tie a piece of rope around them and yank at the blocks to remove them.

While I recommend that chocks are 25% of the diameter of the wheel at all times, these are marketed as “compact” chocks. AFA swear that they’ll prevent roll-back on cars, trailers, RVs, and huge truck tires despite being only 4.5 inches in height.

It’s not just AFA that swears by them either. The Amazon reviews are full of praise, but, there are just over 600 of them.

These chocks come in a 2 pack or a 4 pack meaning you can chock an individual wheel or two at a time. They work out to be very similarly priced to the Roblock chocks and probably work just as well. Especially if you attach a rope yourself.

Race Ramps are last on this list because while they look great, nobody wants to spend a small fortune on wheel chocks. Especially ones that you can’t tie ropes to.

The Race Ramps are by far the most expensive chocks on this list and could cost you over $100 to secure your car while you work on it.

Again, these chocks are made of a durable rubber that’s bound to last a lifetime and even if they don’t, they’re made out of 100% recycled rubber.

The Race Ramps wheel chocks tend to go against what most people believe a wheel chock should be. They’re super light at 1.5lbs and are relatively small too coming in at 6 x 4 x 5 inches.

Despite being so damn different from the competition, they come highly recommended and will hold your car no problem.

The biggest stumbling block has to be the price. While it would cost a lot more to replace your car or your life was it to roll, I feel there are many other options that’ll do the same job if not better for less.

While you’re always better off using the right “tools” for the job. There are alternatives you can use should you be caught short without chocks, or can’t afford them.

If you have wood nearby, I’d definitely recommend making your own wheel chocks.

If you don’t have the tools, the wood could even act as a chock itself. As long as you’re able to wedge it in properly, but there is no guaranteeing it will hold.

Using rough wood could also result in splinters to yourself or your tires, so that’s something else to keep in mind.

Another common alternative is to wedge a concrete brick underneath. While most of the time this will get the job done, again there is no guarantee. Bricks can roll and slide, so use them at your own risk.

Try not to overthink too much though. If it fits under the wheels and prevents your car from rolling, that’s all you need it to do.

3 Of The Best Decal Eraser Wheels