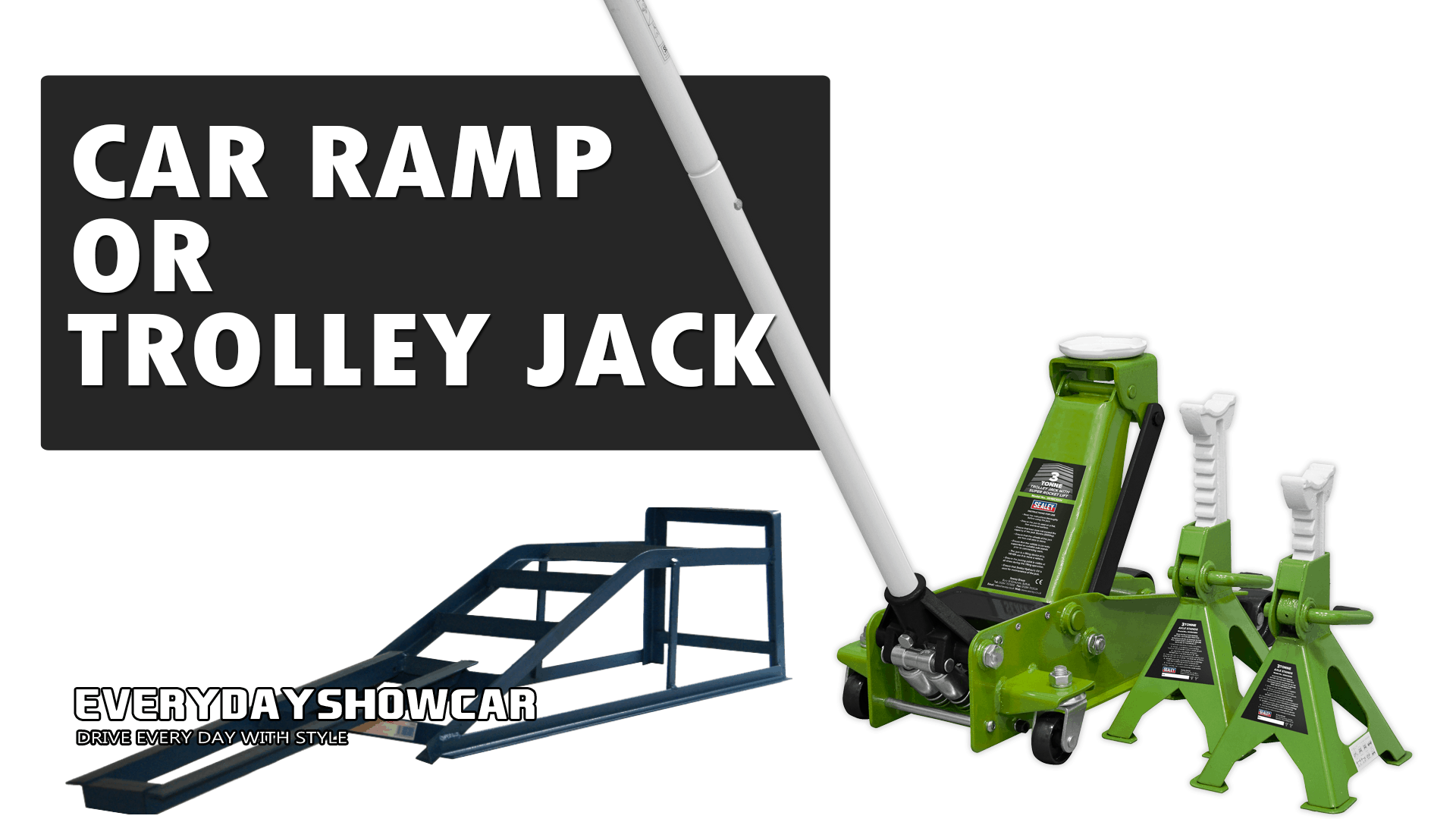 If you’re someone that’s keen to learn about performing home repairs, or are already prefer to do it yourself, you’re going to need a lifting solution.

Without a ramp or car jack, there’s very little work that you’ll be able to do on a car, especially if you’ve already had it lowered.

The 2 solutions for lifting your car at home are jacks and ramps. I’m not talking about a 2 poster ramp either. In this case it’s the plastic or metal ramps that you can drive up, raising your car.

Truth is, using a jack and jack stands will allow you to do more work, but both pieces of equipment have their uses.

It’s not uncommon for DIYers to have both in their garages, sometimes even using them together at the same time.

Differences Between Car Jacks and Ramps

Just by looking at the two different pieces of equipment, there are very obvious differences. Almost everyone will be able to tell you how to use a ramp, whereas a jack, probably not.

Already you can see why someone may choose a ramp over a jack… it’s much simpler to use.

If you walk into any retail garage, you’ll see numerous trolley jacks and jack stands being used. While most shops do have electrical car ramps, they also use jacks for light work and replacing wheels.

The problem with trolley jacks and jack stands, is that there’s so much that can go wrong.

An average joe with little to no mechanical background is going to feel very intimidated when jacking up their car for the first time.

They have to learn how to use a jack, preparing a car to be lifted, safe jacking points, where to put the axle stands and much more.

Not only that, they should also perform various different safety checks to make sure the equipment is functioning as expected.

All of this, and the weight of it potentially going wrong, is enough for most to leave it to the professionals.

Despite the initial scariness…

I believe that a trolley jack & jack stands is the best lifting solution you can get without using a two poster ramp.

They’re portable and incredibly versatile, allowing you to lift your car in almost anyway that you want as long as it’s within safe working load.

Because trolley jacks offer a targeted way of lifting, you’ll have access to every nut and bolt under the car.

If you don’t, simply change the jack or stands to another position.

On jack stands, you can also rotate the wheels of a car. This will allow you easier access to the splashguard, bumper & fender.

Or you know… you could just place a jack stand under the car and take the wheel off.

I would suggest investing in a good trolley jack and axle stand set, If you plan on doing anything more than a routine service to your car.

If you’re on a strict budget, you may want to look at my other article where I list the best floor jacks under $100.

The main appeal of car ramps is how simple they are.

I believe that most people will also feel safer under a ramp, which is a big factor in beginners using ramps instead of jacks.

Being able to place the ramps infront of your wheels and drive straight up them, is not only convenient but has much less risk.

For example, if you were to get the wrong jacking point and lift the car using the sill, you could cost yourself a lot of money. Driving the car straight onto a ramp completely eliminates this scenario.

Car ramps are also thought to be safer because they cover a larger surface area.

A jack stand will balance the car using a pinch weld or jacking point, whereas a car ramp supports the whole front or back end of a car using the wheels.

Even if something was to go wrong, the car would probably just slide down the ramp. Sure this isn’t great, however, it wouldn’t leave you squished under a car.

As well as the increased safety and ease of use, they’re also much more affordable.

A pair of ramps that supports up to 2.5 Tonne of car will only cost you $40 or so. When buying even the cheapest jack, you’ll pay almost double that. Not that you want to cut corners on lifting equipment…

By now you may be thinking it’s a no brainer, ramps are the way to go for beginner DIYers, they do have their downsides.

If you’re working on a surface with little traction, the ramps can slip from under the car as you try to drive up.

Car ramps also limit the types of jobs that you can perform. After all, they take up more room and use the wheels to support the car. If you want to remove the wheels, it becomes an issue very fast…

So Car Jack vs Ramp? Which one should you choose?

I own both, but unless I’m incredibly lazy, I’ll always choose to jack up the car and use axle stands.

This is because I’m confident in my ability, know how to use them and feel safe enough under a car. I also invested money into a good jack, so it feels almost good to lift a car.

If you’re serious about working on cars, you really need to own a trolley jack and some axle stands.

If you’re just looking for a simple solution to lift the front of your car for servicing and oil changes, ramps may be the way to go.

Have a big garage or enough storage room for both? Why not buy both and see which one you prefer?