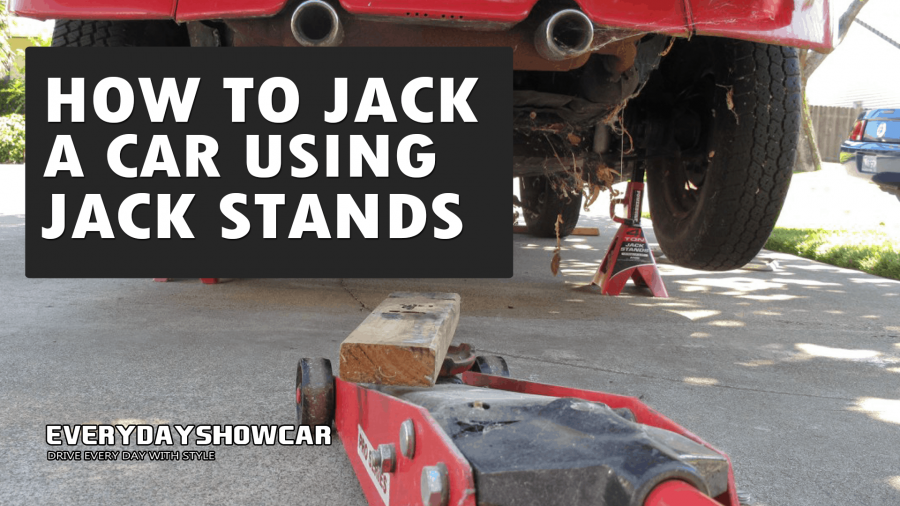 Jacking up a car can be a very intimidating process for any newbie mechanic or car enthusiast. In reality, it’s a simple task, but there are certain things that can go wrong.

Unfortunately, it’s a necessary procedure for a lot of common repairs and modifications. Whether you’re trying to change a tire, replace a wheel, remove and refit body parts or change the breaks, you’re probably going to have to lift the car in the air.

In this article, I’m going to tell you how to jack up a car while lifting all 4 wheels in a safe manner.

Ideally, you’d have a ramp, but very few can afford it.

What You’ll Need To Lift A Car

You don’t need much to lift a car, as a result it’s fairly inexpensive.

If you’re on a budget, here are the best floor jacks under $100.

Personally, I’d invest in good quality equipment that will stay with you for the rest of your life, but if you need to get a car up in the air on a budget, you can definitely do that.

At the end of the day, it depends on how much you’re going to be using the equipment as to how much money you will want to spend.

Safety Checks Before Jacking Up A Car

Since you’re lifting up a heavy vehicle and working under it, jacking it up incorrectly could be a matter of life and death.

Assuming you don’t want to die, here’s a list of precautions you should take before jacking up a car:

I cannot emphasize this enough. This is a matter of life and death. If something is sketchy or you’re not sure, don’t do it.

How To Jack Up A Car Using A Trolley Jack

For the most part, the process of jacking up a car is going to be the same. The only thing variations will be the lifting equipment that you use or the jacking points.

In this example, I’m going to assume you’re using a trolley jack and are lifting a car that has the traditional jacking points.

The first thing that you want to do is find a flat space to work in.

If you’re lifting the car on an uneven surface, it’s very unsafe. You’ll find that as you lift the car, the jack moves and may even roll while you’re under the car.

The obvious solution to this problem is to find a flat space. Be it renting a garage, using a friends space or finding an abandoned car park where you can perform a minor repair.

Put The Car In Park, Chalk The Wheels,

Another thing that you’ll need to do to make sure that the vehicle doesn’t move is apply the handbrake and chock the wheels that aren’t going to be lifted.

If you plan on lifting all 4 wheels, you can chock the back while you work lift the front and vice versa, just to be safe.

This is just so that the car doesn’t move while it’s in the air. Many people don’t use chocks, it’s barely ever seen in most garages, but you can never be too safe.

Now for the juicy part… actually putting the car in the air. As long as you follow these steps, you’ll be able to lift any car you want, without worrying about your safety or damaging the car.

How To Put A Car On 4 Jack Stands

There aren’t many reasons to put your car on 4 jack stands.

It doesn’t matter whether you’re changing the exhaust, wheels, or performing any other regular repair, you can almost always get it done by lifting just the front or the back.

That said, if you’re servicing the transmission or just fancy lifting your car completely off the ground, it is safe to have your car lifted on 4 jack stands as long as you’re in a cool area with solid ground.

The process is very similar to jacking up one point on the car. You just have to put a jack stand underneath and repeat it 4 times.

Always try to refer to the service manual for safe jacking and jack stand points. This way you can be sure that you’re not going to cause any damage to the car, or yourself.

As long as the weight is evenly distributed and the car doesn’t move when you put pressure on it, you should be good to go.

If you have any uncertainty, don’t get under the car! Maybe get a professional to do the work instead…

How To Jack Up A Rusted Car

If you’ve ever looked at older cars, specifically older ford models, you’ll find that more often than not, the sills are completely rusted.

Obviously, the last thing that you want to do is lift a car using a rusted jacking point. This will result in damaging the car and it may even fall on you when you’re working underneath it.

The safest way to jack up a rusted car is to avoid any jacking points that are rusted.

Even on the worst rust buckets, there will be safe jacking points such as:

Simply take a look under your car and find another jacking point that’s not rusted or use a part of the sill that’s not covered in rust.