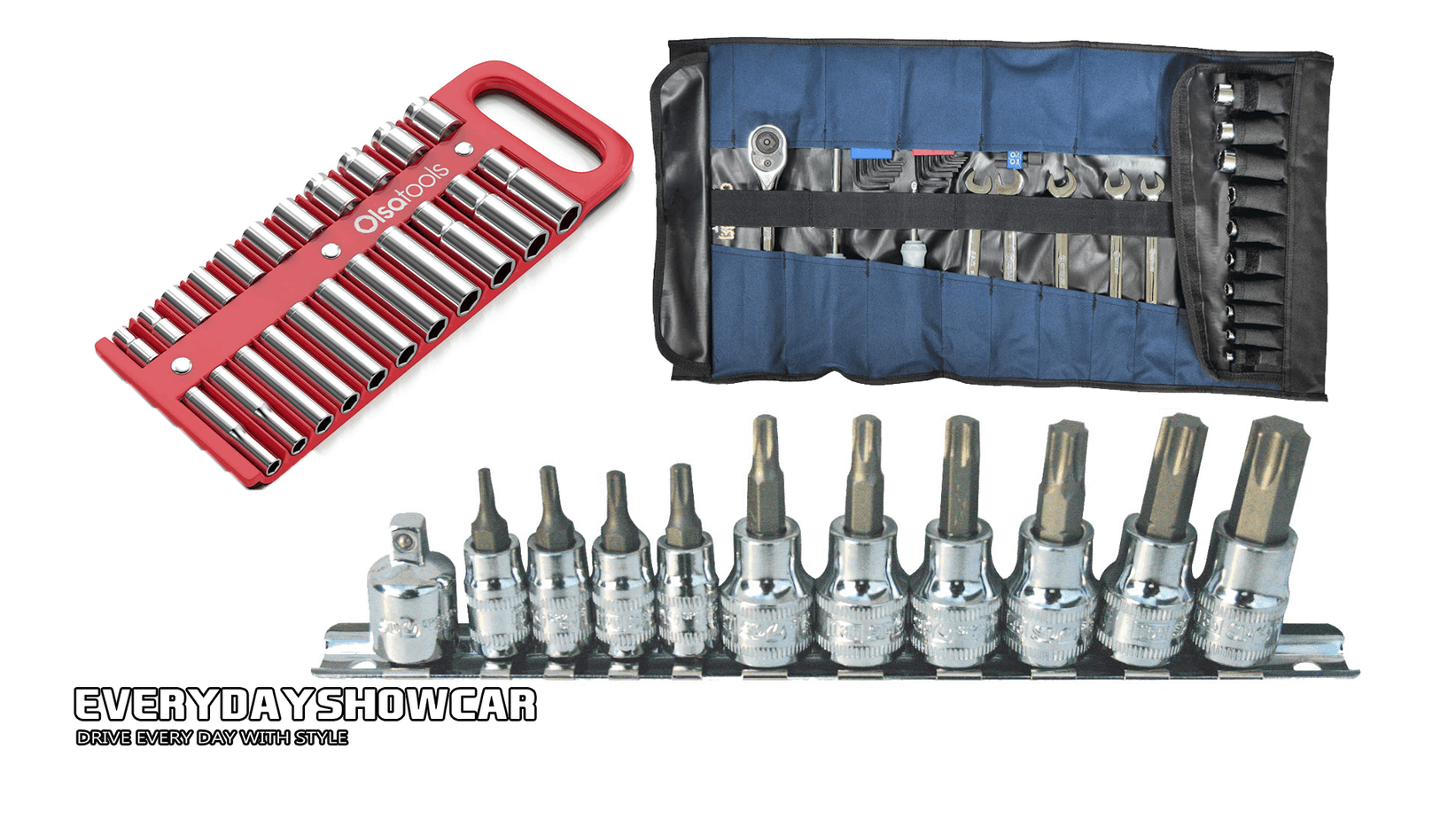 For some it’s “organized chaos”, for others it’s a complete mess.

It doesn’t matter whether you’re a tradesman trying to earn bonus or a weekend mechanic, organizing your tools is something that’s important but is always overlooked.

In this article, I’m going to show you how to organize sockets in your tool chest and/or tool bag.

This way, whenever you go to find a tool it’ll be there, and if it’s not there, you know that you need to find it or replace it!

At the end of the day, the sockets aren’t cheap. You also don’t want to waste time trying to hunt down a socket when you could be working on a car.

Stay organized and minimize stress with these useful storage solutions and techniques.

Whatever you do… don’t place them down inside of a car. It’s a recipe for losing your sockets!

How To Organize Socket Sets & Tools

If you’ve ever worked with someone that’s been on the tools for a long time, you’ll notice they have an abundance of tools, yet know where everything is down to the last socket.

Everyone has different methods of organization, remembering and storage. However, just because something works for one person, doesn’t mean it’ll work well for you.

I suggest that you think about your toolbox, the tools & sockets you have and start organizing your setup in a way that works for you.

Use The Original Storage

Every time that you buy a new tool or socket set, they’ll more often than not come with their own storage or plastic cut out.

Providing the original storage is not too big & bulky, why not slot it into your toolbox as is?

This is often the way to go for socket sets, as well as screwdriver sets. However, in some cases, they will be too big.

Many socket sets come in a folding box with two halves.

If this is the case, you may be able to separate the trays by removing the pins from the hinges.

If not, you have to decide whether to cut the box in half or find another way to store the set.

Besides keeping things in their original packaging, socket trays are by far my favorite method of socket storage.

Socket organize trays allow for safe and organized storage while leaving your sockets easy to access.

The socket storage that I’ve shown above supports both SAE & Metric sockets. With each post showing clear identification.

You’ll also receive a tray for all 3 ratchet drive sizes, in both SAE & Metric range.

While obviously the features will vary between manufacturer, but most socket trays will also support both deep and shallow sockets.

I love the way that the sockets just slip on and slip off, making it efficient for working in a shop.

The only negative is that when it comes to moving them about, whether you want to put it in a tool bag or storage box. Unless you have a tray that comes with a lid, you’re probably going to have a mess to clean up.

When I first started out, I had a bunch of socket rails. They were super cheap and allowed me to throw out a couple of big, ugly boxes that I couldn’t keep in my rolling toolbox.

Since then my tool collection has grown a lot. However, I still find socket rails somewhat useful to have.

You can also get long rails, short rails, medium rails, or even cut them to size yourself.

The flexibility and growth potential is what really makes them great.

That said, I try not to use them as much now, because I have good socket trays.

It may have been because mine were cheap, however, I always found myself fighting with the rail to get the socket off. Sometimes It’d result in other sockets flying off too.

And while I do still use them, it’s mostly small ones with a handful of sockets that I use frequently. That way I can slip the rail in my pocket and strip something off the car that a painter may be wanting to be removed.

Buy The Olsa Rails (pictured above) On Amazon.

This isn’t one I use myself or have seen many people use if I’m honest.

I like the idea, however, a tool collection is forever changing and expanding so for me, the rigidity doesn’t really make sense.

Don’t let me put you off though.

Having a defined space for everything certainly has its benefits. You certainly cant put tools or sockets away in the wrong drawer.

It also looks very cool and clean to open up a drawer and see the tools separate and in their dedicated spaces.

The problem is unless you’re creating them yourself. You’ll probably struggle to find inserts that fit your exact tools and exact tool chest.

Super cool concept, but for me, that’s where it ends.

Magnetic Socket Holders certainly have their uses but are not for everyone.

They’re portable trays that support a set number of sockets, and you guessed it… are magnetic.

The magnets will hold the sockets in place as you carry the socket holder around from job to job.

It’s also pretty useful to have one of these if you’re short on storage. Most magnetic socket holders can be stuck to the top or the side of a tool chest too, potentially freeing up a drawer.

You’ll also find that these are great for tool bags because the magnets mean that the sockets have literally 0 chance of going anywhere.

If you’re a mobile mechanic or someone that moves about a lot, I’d probably recommend picking some of these Olsa trays up.

However, if you’re in a shop or your own garage. You probably won’t find much use for these.

The socket pouch or roll tool organizer does a similar job to the magnetic socket holders. They make sure your sockets don’t escape when moving around.

Socket pouches are also slightly easier to remove sockets from, you don’t need to fight magnets every time you want to use a socket.

You do however have to fight with fabric.

Again, I do believe these pouches have their place.

If you get that fits a 1/4″ socket set, you can simply roll up the tools and carry it about, taking up less space.

For example, these pouches could be good for storing a socket set in the back of your car for emergencies.

They’re not ideal for someone that’s working in a garage with the appropriate storage and accessibility.

Maybe I’m being too narrow-minded, but, they’re probably the worst way to store tools.

Bonus Tip: Use Your Pockets

If you’re someone that knows what they’re doing and are looking to improve your efficiency, I suggest using your pockets as a measure of temporary storage.

My work trousers have a bunch of pockets in them and so does my jacket.

I am able to put impact bits in one pocket. Sockets in the other. Extensions in another and so on, so on.

At the end of the day, you want to put them back in the correct places. But even if you eliminate a couple of extra trips to your toolbox, that’s a little extra time sold.

Obviously, you don’t want to fill your pockets with every socket you own. Simply choose a couple that you use the most.

For mechanics, it may look a little different.

If you’re trying to work fast, this is a great habit to have. However, don’t load your pockets up too much, it will cause you to work slower if anything.