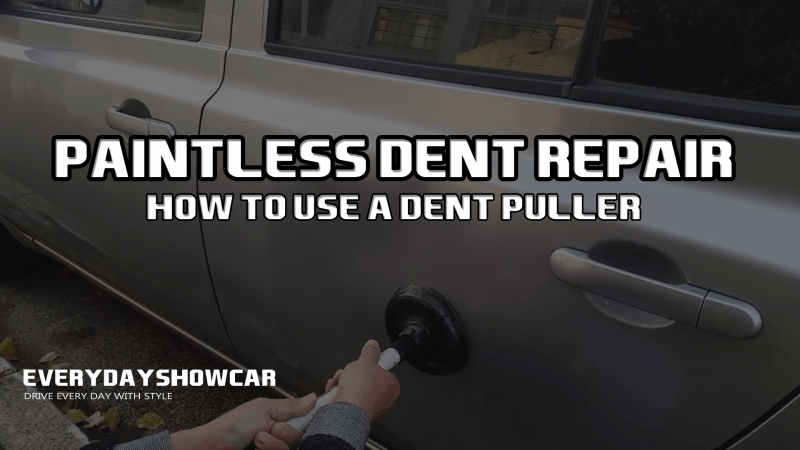 Having dents in your car can be very frustrating, especially if they’re not your fault.

Thankfully, there are ways that you can fix these unsightly dents without breaking the bank.

There is numerous DIY dent pulling kits available to buy. Many of which look like cheap plastic and may break at the slightest attempt of pulling a dent.

Believe it or not, some of these tools are actually useful and can when used right, remove dents from your car.

So, if you want to learn how to pull a dent, what types of dent pullers are available and which ones are the best to buy, keep reading!

Many people believe that paintless dent repair is easy and why wouldn’t they?

You can buy a simple glue puller that you attach to a vehicle, one quick pull and your dent pops back into place, right?

Wrong. DIY PDR kits can be effective on smaller dents. They can pull out small hail damage and trolley dents but the fix will be far from perfect.

Cheap PDR Kits are often a waste of time and inexperienced car enthusiasts are at risk of wasting their money and increasing the damage to their car.

There’s a reason why Paintless Dent Removal costs what it does. It takes many years of experience and frustration to fix a dent as well as a professional can.

How To Use Dent Pullers

Before you even think about attempting to pull out a dent there is one thing you need to do first.

Washing the area will remove contaminants and allow the glue tab to stick evenly to the surface of the car. Cleaning and preparing the surface area is key to a good pull.

This PowPDR PDR kit is a 56 Piece set that comes with a bridge puller, gold dent lifter, and hot glue gun.

I’m not a fan of suction cups, I struggle to accept they have enough suction to pull any solid panel. With that being said, they can be effective and you could always heat up the panel before you try pulls.

There are a couple of variations of Slide Hammer pullers, I’d personally opt for a glue pulling slide hammer over a suction cup one for reasons mentioned above.

Manelord sells a Slide Hammer T-Bar kit that comes with 21 glue tabs, 10 glue sticks and a tap down kit.

Sealey has come up with an interesting concept that I’m interested in trying out. It’s a suction cup puller that is connected to your air compressor. The puller looks to be more effective than any other suction cup available on the market.

DIY Pulling kits aren’t really the best things money can buy. Sure, you could make a car that looks 50% factory condition look closer to 80%, however, you could also add more dents into the vehicle.

If you’re seriously interested in learning Paintless Dent Repair it’s best you buy the correct dent removal tools and a scrap non-runner car to practice on.

Looking for a cheap fix to remove that ugly dent in the side of your car? I’d leave it to the professionals.

Auto body repairs can be costly, but if you value your car it will be worth it.

PDR Glue Remover: Which Release Agent To Use?