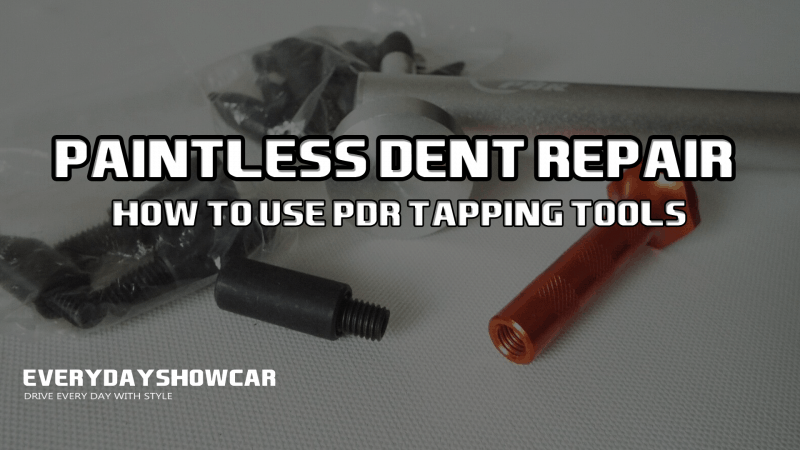 But, when you actually try to remove a dent, it’s almost certain to go wrong. I would know, I’ve spent many hours of my life getting frustrated at dents that just won’t go back into place.

Since then, after many hours of youtube videos and shouting at scrappers, managing to learn the basics of Paintless Dent Removal.

Throughout this article, you’ll learn why you need to tap metal after pulling, what the best tap down tools are as well as various techniques that will help you achieve a professional repair.

why do you tap metal after pulling?

In the beginning, I found learning how to use a PDR Tap Down Tool to be very important. I was forever creating high spots and peaking out metal in every repair.

While I’d try my best not to peak the metal sometimes it’s inevitable that the repair will be move in a way that’s uneven.

Thankfully, using my plastic tap down tool I could knock down any of the high spots in and around the dent. Thus, resulting in a smooth-to-touch professional finish that I could be proud of.

What Are the best PDR Tap Down Tools?

If you’ve bought a DIY Dent Repair kit, chances are you already own a Tap Down tool or pencil of some sort. They’re an essential PDR tool, so they come in almost every kit.

They’re not exactly the most advanced piece of kit. It’s a piece of plastic that’s designed to push aluminum down without damaging it.

You can get fancy tap down tools but almost any tap down kit will do the job.

With that being said, I do have a couple of kits and tools that I’d recommend for getting started.

I hope by now It’s fairly obvious what you’ll need a tap down kit for.

The HiYi 10 Piece Tap down kit comes with 9 different shapes of tips. The tips are screw-on, making it easy to change them on the fly.

This set also comes with a small aluminum hand hammer that has 2 rubber heads. If you want, you can use this on the paintwork of your car. Since it has a rubber head, it will not cause any damage to the paint if you tap gently.

While it’s nothing special, it’s more than enough to tap down those pesky high spots.

Whenever you look at Dent Repair Kits and see what they have to offer, they always come with a small paper line board.

Using line boards you are able to read the reflection on the surface and know where to tap.

Unless you’re willing to spend an insane amount of money on an Elimadent Line board, the WHDZ Led Line Board is the best you’re going to get.

It has two color modes, allowing you to choose the color that reflects best on the car. It’s also very easy to maneuver, using suction cup technology and an adjustable stand so that it sits at the angle you need.

Buy the WHDZ LED Line Board to see where your dents crown.

Sometimes, dents can be very stubborn.

A lot of the time, this is because they’re a stronger metal than aluminum, or because you’re working in colder weather.

Because stainless steel tap downs are heavier and are solid in comparison to rubber, they require less striking force.

Less striking force means higher levels of precision, which is great for removing small and sharp crowns in a panel. (It also means you have less chance of striking your hand with a hammer, been there, done that).

You do need to be more careful using a steel tap down though, it’s very easy to create dimples in the paint of the car. It’s also very easy to turn your high spot back into a dent.

Be careful and make sure you learn how to use this tool properly before taking it to a client’s car.

Buy The Steel Tap Down from DentMagicTools

When it comes to PDR and Dent repair as a whole, there’s almost always a use for a heat gun.

On the cold winter days when you’re stood in the driveway, getting frustrated at the metal because it’s not moving, it may be time to pull out the heat gun.

Gently heating up the panel can make it much more malleable making for easier repairs.

Using a heat gun is straight-forward but make sure not to apply too much heat. You don’t want to be in a position where you’ve burned the paint on a customers car.

There are various different ways that you can tackle a dent. Personally, I believe in the way that Top Gun PDR Training Teaches. It’s the best way to repair a panel without having to spend hours trying to dress up the surrounding areas.

When tapping dents you should work on a “last in, first-out” basis.

Instead of going straight to the middle of the crown, you should work from the outside-in. This will help to disperse energy from the high spot into the surrounding low spots.

Once you’ve removed all of the tension & energy from the raised crowns, now it’s time to perform a glue pull on the remaining low spots.

If you don’t want to pull, because the car you’re working on is a re-spray, then you have to push it out using a rod or one of the other PDR pushing Tools that are available.

When opting to push out the dent, make sure that the surrounding area is perfectly flat, this will significantly decrease the time spent dressing up the repair.

Dent not moving? This is because there is still pressure in the surrounding areas, use your line board to detect any pinches that surround the dent.

After going back and removing the pressure, the dent will move with ease.