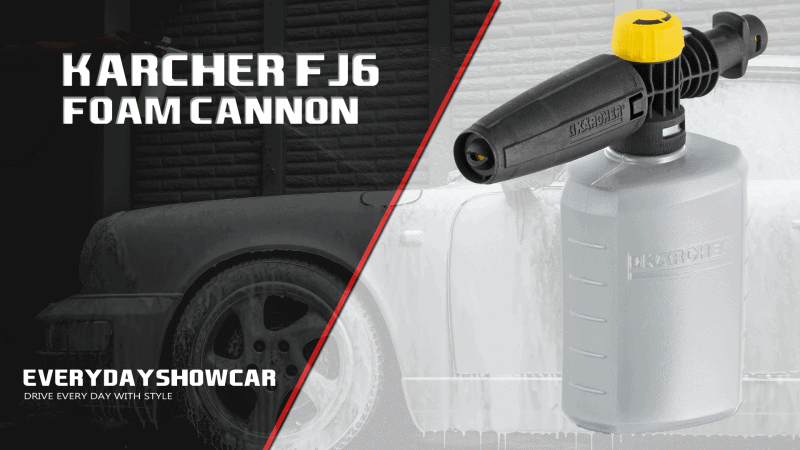 There are many reasons why you’d want to add a foam cannon to your detailing arsenal.

Buying the Karcher FJ6 Foam cannon will give you more options, allowing you to introduce snow foam and foam cannon soaps into your wash regime.

In some cases, using a foam cannon can completely eliminate the need for wash buckets.

If you wanted, you could foam, wash and wax a car using only your foam cannon and the Autoglym polar series.

As you can already see, there are good reasons to buy this foam cannon, but you should continue reading to find out more about the cannon itself.

How To Connect & Use The Karcher Foam Cannon

I upgraded to my Karcher pressure washer so that I could actually use a foam cannon. I’ll be honest though, I didn’t really research much beforehand.

The main issue with a Karcher pressure washer is the connector. It’s a unique bayonet shaped connector that very few foam cannons use.

The Karcher FJ6 Foam Cannon uses this exact connector and is compatible with every Karcher K-Series pressure washer.

All you need to do to connect the cannon is to slot the gun and cannon together, pushing in and twisting the cannon to lock it. It’s very simple to do.

Now, If you want the freedom of using any foam cannon on the Karcher washers, you can buy a special adapter.

Using this adapter will allow you to use any 1/4” quick connect cannon with a Karcher washer. Thus opening up a whole new world of foam cannons. It’s certainly handy to have.

Is The Karcher FJ6 Snow Foam Lance Worth It?

The Karcher FJ6 is one of the cheaper foam cannons to buy. It’s definitely considered as an “entry-level” foam cannon.

Despite its low price, it still has almost all of the features you could need in a cannon:

I have to admit though, it is lacking in some areas.

The FJ6 is made completely out of plastic, which will put a number of people off.

When it comes to foam cannons, most people prefer brass heads and connectors. It’s believed they’re stronger and less likely to leak.

Despite the fact its plastic, I’ve found it to be very sturdy and able to take a lot of abuse. The container is thicker than most other foam cannons that I’ve tried and I’ve not had any issues with leaks so far.

As long as you’re using a Karcher pressure washer, you’ll always have a plastic bayonet connector. If it’s that big a deal, you’ll have to change the pressure washer.

Another thing to consider is the volume that the cannon holds.

That being said, If you’re looking to wash multiple cars at once or are working on trucks, it may quickly become an issue.

Refilling the cannon mid-application isn’t going to cause any issues, however, it’s inconvenient to say the least.

Buying a 1l foam cannon will ensure that you don’t have to refill mid wash.

With the two negatives out of the way, it’s time to focus on the positives.

The foam cannon fits onto any of the Karcher K-Series pressure washers. Meaning you and your Karcher buddies can swap attachments anytime you want.

You’re also given complete control over the type of foam produced.

The adjustable nozzle will allow you to change the spray fan, and there’s also a dial that lets you control how much detergent is used at any one time.

What makes this foam cannon so attractive over everything else is the fact that it’s so accessible.

Because it’s part of the ever so popular Karcher range, you can go anywhere that sells pressure washers and will be able to pick up this attachment.

There’s definitely a place for this on the market. It’s hassle-free, cheap, and can lay down a decent layer of foam.

Yes, you’ll probably get better results with a different cannon, but you’ll also have to buy a connector, or pay a lot more for a Karcher Compatible Foam Cannon.

If you’re unsure about foam cannons, this is at the perfect price range to try one and see whether they live up to your expectations.

If you only wash smaller cars, again, this will get the job done and won’t cost you an arm and a leg.

It’s very basic and very cheap, but I’d definitely recommend it as a starter cannon.

Buy The Karcher FJ6 From Amazon.com

Click here to find the best foam cannons on the market.