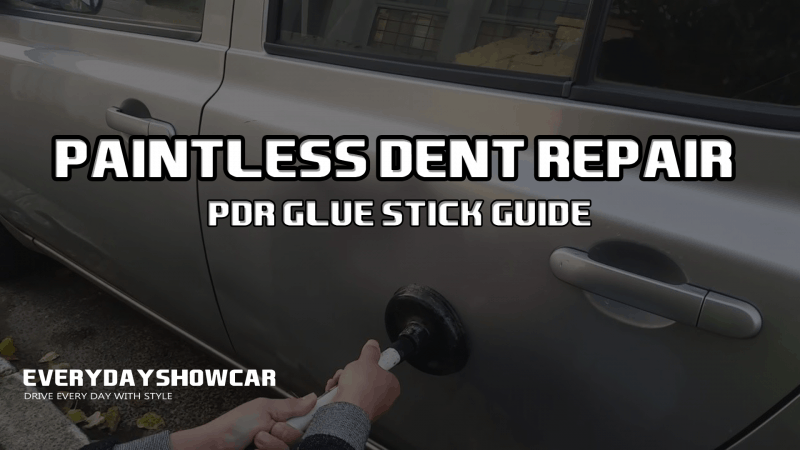 In paintless dent removal, there are two methods of pulling a dent out, glue pulling and suction. It’s important that you learn how dent pullers work before you even think about PDR glue.

In this article, I’m going to tell you everything you need to know about PDR Glue while also recommending the products that I consider to be the best PDR Glue.

What is PDR Glue

When performing PDR using a dent puller and glue tabs, you’ll need something to stick the tabs to the damaged panel. This is where PDR glue comes in. It’s designed in a way that makes it super strong but easy to remove at the same time.

Paintless dent removal glue is made specifically for pulling dents out of panels. It’s got a very high tensile strength, is super flexible, and can be removed from the car leaving it completely defect-free.

Most glue sticks are made to a universal size that will fit any quality glue gun. That said, if you’re able to get the diameter beforehand and make sure that it definitely fits your gun, it could save you a lot of time and hassle.

After all, time is money.

What Type Of Glue Sticks To Use On Dent Puller

There are many cheap pulling kits out there that come with their own glue.

Most of the time this is a very cheap glue that isn’t going to get you very far. You may find success with the glue provided in the kits but if you’re looking to go pro and do some serious work, you’ll be better off looking elsewhere.

The main factor that will determine which glue to use is the temperature. Colors don’t really mean anything, however, a lot of brands will use colors to indicate what kind of temperature they should be used in. Just pay attention to the tech specs and you’ll be alright.

AnsonPDR has compiled a list of the most popular glue sticks and which temperature they should be used in.

Depending on where you’re located, you’ll likely get away with owning 1 or 2 sets of glue sticks. If you’re a business it’s probably best you have one for each type of weather, just for peace of mind.

I personally enjoy using Hawg glue but if you were to choose another brand from the list above you wouldn’t have any issues. As you learn your trade and experiment with different brands you’ll start having your own preferences.

You’ll also find that as time goes on, there are more interesting and futuristic products.

When I first wrote the article, I could only dream of glue that doesn’t need alcohol to remove it from the car. Now we have Mega Power Green PDR Glue that is almost release agent free.

How to remove glue

Other than using release agent-free glues, there are 2 methods of removing pdr glue.

The most efficient method uses isopropyl alcohol or acetone.

Have a bottle filled with isopropyl alcohol or acetone that you can either spray or rub onto a panel using a cloth. Make sure you’re wearing gloves when applying it otherwise your skin could become agitated.

Once you’ve wet the glue and surrounding areas with either isopropyl or acetone, the glue should peel right off. If it doesn’t, wash the chemicals off, let the panel dry, and read the second method listed below.

When removing glue from the car after a pull, you don’t want it to be hot. If you attempt to take the glue off while it’s still hot you’ll just spread it around the panel creating a bigger mess.

Instead, make sure it’s warm enough to be flexible. Grab your heat gun, set it on a low speed, and heat that sucker up.

Once the glue is heated up it should peel off easily enough. Sometimes this method will require a putty knife and a steady hand. It’s far riskier and is more time-consuming and should only be used if isopropyl and acetone do not work.

Always make sure that there is no residue left behind. Why would you remove an ugly dent only for glue etching to be left behind?

Again, acetone or isopropyl will remove any residue, make sure to work fast to remove the chemical from the panel, and make sure you use a clean rag, the last thing you want to do is scratch a customer’s vehicle.

Can I Use Regular Glue Sticks For PDR

If you’ve seen the price of PDR glue, it’s much more expensive than regular hot glue.

It may be tempting to try and save money by using regular hot glue, but this is something you should not do under any circumstances.

Normal glue isn’t designed for car paint. There’s a good chance with the heat that it could start to bubble the paint. It’s also much harder to remove from the car and will most likely end up in paint defects once you’re finished pulling.

Whenever a car is concerned, I always recommend using the correct products. Cutting corners often leads to poor results or even further damage.

Dent Puller Glue Not Sticking, What Should I Do?

Every dent is different and there are many different factors to consider if your glue is not sticking to the car.

First off, you want to make sure you have high-quality glue. As previously mentioned, a lot of the glue supplied in cheap kits is not good enough. Choose a reputable PDR glue.

Secondly, have you remembered to wash the panel you’re working on? Dirt will decrease the effectiveness of your glue

Thirdly, have you made sure that the tab you’re pulling with is clean? I like to clean them with my glue remover (Isopropyl or Acetone) after every job, that way I won’t have any delays on the job.

The best way to find out the best pdr glue is to test them all.

While dentless touch hasn’t tested every single glue on the market, they have tested most of the leading glues under strict measures.

During the DentlessTouch Test, they found that when a glue didn’t pull well, it was mostly down to the environment. The ambient temperature matters and most of the glues pulled best around 90-92 degrees.

The Root Beer PDR Glue was by far and away the best performer making consistent pulls and withstanding 1266lbs of pulling.

Root Beer is marketed as a “hot weather” glue and is used often on bigger dents.

When it came to the colder test, this glue still performed well. It wasn’t the best, but it still pulled 600lbs and was very consistent with each pull.

You can buy Root Beer PDR From AnsonPDR.