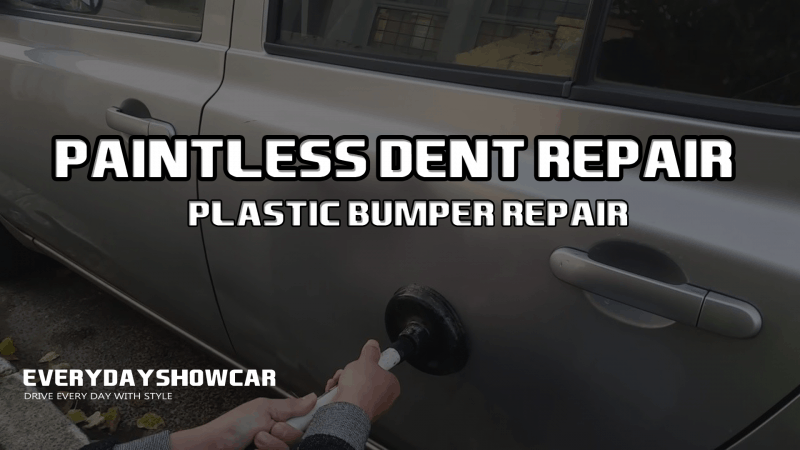 The number of cars going around town with misshapen bumpers is astronomical.

It’s surprisingly easy to perform paintless dent repair on a plastic bumper. I guarantee you that anyone who reads this article can do it.

I’m not promising that you’ll get the bumper back to 100%, but, using this article you’ll be able to make the damage a lot less noticeable.

Perfecting a bumper with Paintless Dent Repair is actually very tricky but in a lot of cases, you’ll be able to make it look as if it was never even damaged. Especially to the untrained eye.

The first step of any repair is to assess the damage.

The level of damage will determine the end result. If the bumper is cracked, split, or scratched in any shape or form, you’ll not be able to repair it back to 100%.

Also when the paint is damaged, the only way to fix this 100% is to refinish it. Sometimes you can use a DA Polisher to remove scratches but anything serious will require repainting.

This doesn’t mean you can’t make it look better though. There’s no harm in getting the bumper back to shape and driving around with it until you can afford to pay for a proper repair.

You also need to take into consideration how the bumper is sitting.

For the back end – If the gaps between the bumper and the trunk lid or the bumper and quarters aren’t right, then there’s probably “hidden” damage. This could be something small like a bracket being broken, or something as big as inner panel/front panel damage.

If the damaged bumper is a result of a harder collision, you should probably expect damage behind the bumper, especially on the front end.

Its up to you whether you repair/replace the broken parts. I always recommend fixing everything, but I’m aware some people will ignore the hidden damage and just repair the bumper.

How To Repair A Plastic Bumper Using PDR

The first thing you need to do is access the back of the dent. While bumpers do bounce back due to elasticity, it doesn’t magically pop out and will need some help to come out all the way.

Ideally, you’d have a socket set and trim tool to remove the bumper from the car but I’m aware that not everyone wants to get this involved.

If you don’t want to remove the bumper, you need to find a way to access the back of the damaged area.

A lot of the time you’ll be able to get your hand up behind the rear bumper which is enough to repair the bumper. Unfortunately, the front bumper tends to have an undertray and will require some removing and refitting.

If you don’t know how to remove the bumper of your car? I suggest looking it up on google or youtube. All you’ll need to type is “[Car Brand] [Front/Back] Bumper removal”.

Most bumpers are easy to remove. It’s normally a matter of 10-20 bolts and/or clips on modern cars.

Heat up the pressure points using a heat gun

Instead of targeting the middle of the dent with the heat gun, apply heat to the areas that hold pressure. This is normally the top, bottom, and edges of the dent.

If you heat up the areas which are circled in red from the front and the back of the bumper you will have less risk of burning the paint as you’re not holding the paint gun on one area for a prolonged time.

Doing this will allow you to spread the heat evenly and remove the bulk of the damage fairly quickly with minimal risk.

You don’t need an expensive heat gun to do this job. We’re just looking to heat up the bumper a little bit, a cheap heat gun will do the job.

Push Out The Dent

It’s hard to say when the bumper is at the right temperature to repair. Too hot and you can damage the paint by touching it as well as burn your hands.

I normally start trying to repair the bumper while it’s still relatively cold, this way I don’t burn my hands or damage the paint. It’s also much easier to feel the bumper this way, running your hand along it and checking for highs and lows.

You can use an oven mitt or some sort of gloves while pushing it out if you’re finding it too hot to touch.

When pushing it out work it the same way as you would any other dent. Go from the outside to the center, working your way slowly inside for the quickest and easier results.

Working on a dent like this with just your heat gun and hands, you can make it go from 50% to 95% factory. It will not be perfect, but it will be a lot harder for the average person to spot.

If you want to make it as close to 100% as possible you’ll probably have to get into sanding the bumper, filling it, and repainting it.

Even after a Bodyshop repair, the bumper can feel a little strange but still look fine. Plastic is super forgiving, as long as the bumper isn’t black, you’ll get away with a lot.

Just be proud of what you have done. You’ve saved yourself in the region of $200-$400 by repairing the bumper on your own.

If you have before and after pictures of your repair I’d love to see them!