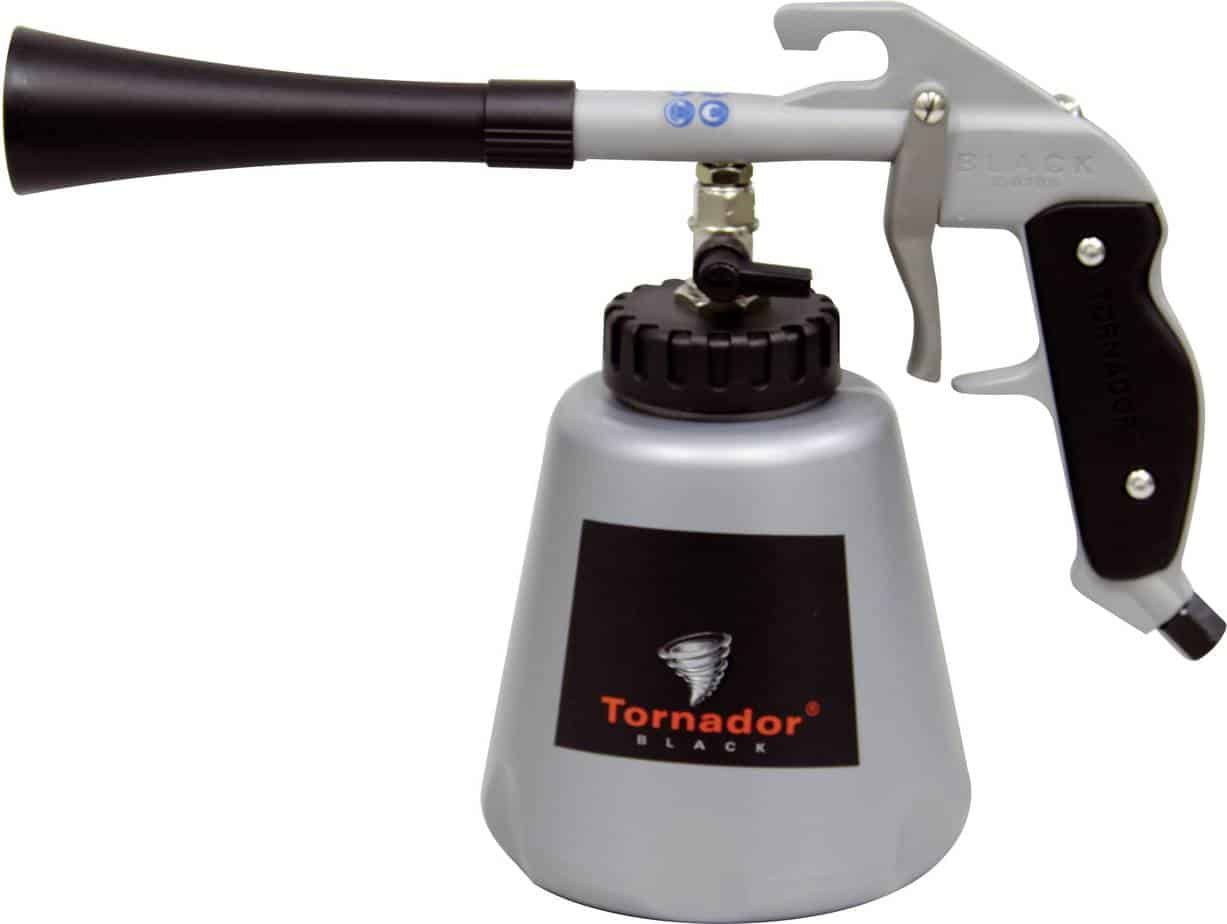 The Tornador Gun and other compressed air cleaning guns are highly effective and can be used to clean pretty much any surface you desire.

Unlike standard air guns, the tornador has a straw inside the funnel-shaped tip. This forces the air to rotate, causing the air to come from different angles while covering more surface area.

If you’re someone that does a lot of interior cleaning, this gun can be a moneymaker as well as a lifeline.

Cleaning the various different types of fabrics in today’s cars can be a struggle.

However, when you use this gun, you can simply blast the dirt free from the surface and make life much easier.

Buying the original Tornador will cost you a fair chunk of change. That said, if you’re a professional and it speeds up your detailing process, it’s definitely worth it.

How To Use The Tornador

To use the Tornador, you’ll need a handful of equipment and cleaning products.

Buying all of these together will set you back around $250 – $400. It’s quite the investment, but if you’re a professional, it’s well worth it.

When it comes to buying a compatible compressor. The Tornador Black technology means that you can now use 120V portable air compressors.

As long as you have a compressor that supports a constant air pressure between 5.5 and 6.3 Bar you’ll be getting the best out of the gun.

It’s recommended that you don’t exceed 110 PSI, this is likely to cause damage to the gun.

When buying an air hose, you’ll want to make sure it’s long enough so that you can use it anywhere inside a car.

Buying an air hose that’s too short will seriously limit the effectiveness of this tool.

What chemicals to use in the Tornador?

If you didn’t already know, the Tornador gun has a container that can be filled with any liquid of your choice.

This liquid will mix with the air and create soapy, foamy suds when it blows out of the tip. (If you want, It’s not mandatory to use it).

In theory, and while it’s certainly not as good… the Tornador gun can double up as a foam cannon too.

Anyway, long story short… use whatever you want to use.

I like to switch the chemicals that I use based on the task that I’m doing.

If I was pre-washing a car, obviously I’d use snow foam or traffic film remover.

Cleaning the upholstery or a headliner? Fill it up with a fabric cleaner or spot removing solution.

Removing dust or fingerprints from the dashboard? Why not use a plastic and rubber cleaning solution?

There’s not really a wrong way to use this gun. Just whatever works for you.

I know there are many people that just use water or a mild all-purpose cleaner solution for every application and find that it does what they need.

It all depends on the application and the level of contamination.

Where To Use The Tornador Gun

The tornador gun can be used on any surface, both interior and exterior.

I believe the gun is designed mostly for interior use.

Using it for tasks such as:

While the gun can be used on exterior and painted surfaces, it’s more efficient to use a pressure washer or even a simple hand wash.

That said, if you’re looking to clean door and boot jambs, this gun is perfect for the job.

The only place I’d recommend not using it is around delicate wiring and fragile components. It’s pretty unlikely, but the high pressure could potentially damage or snap them.

Better to be safe than sorry, especially if it’s a customer’s car.

Should You Buy A Tornador Gun?

The Tornador Gun certainly isn’t for everyone.

I would say that only professional detailers that are doing multiple interior cleans in a day really need it. Even then, there are alternative tools that work just as fast with less barrier to entry.

Here’s a list of what I consider to be the pros and cons for this gun:

I think, if you’re seriously considering this gun, you should answer 3 main questions.

If you answered yes to the majority of these questions, maybe you should buy the Tornador gun or a cheap “knock-off” alternative.

Tornador has a whole host of tools that they’ve released over the years. You can find the difference between them all in the video above.

The Tornado Black is considered to be the better option out of the two. It’s more powerful, uses less CFM, and is much more durable than the original gun.

The tube that spins around creating the tornado effect on the classic is also known to cause a lot of mechanical wear & tear.

On the later “Tornador Black” this problem was addressed by switching to a fixed piece that’s moved on a bearing system, resulting in less mechanical resistance and higher reliability.

There’s also a clear difference in performance with the Z-020. Tornador themselves recommend it for “big heavy-duty jobs”.

The Z-010 is almost half the price of the newer Z-020 Tornador Black. However, in this case, it’s almost certainly worth the upgrade to the more expensive model.

Anyone that’s used both will confirm this.

Because you have to buy a decent air compressor, air line, cleaning chemical and maybe even generator if you’re a mobile detailer, the costs quickly add up.

With the rest of the equipment costing so much, you may be looking for a cheap tornador alternative to get you by in the mean time.

While this isn’t necessarily a bad idea. Relying on a cheaper tool for a long period of time isn’t something I’d want to do as a professional.

The Joint Stars High Pressure Car Cleaning Gun is very similar to the original Tornador and is available for almost 1/3rd of the price.

It comes with a reliable air gun, the same liquid container and the same white cone.

Joint Stars have also included the rotating tube that the Z-010 tornador gun has. Meaning it creates the tornado effect that you desire, but over time you may see increased wear and tear.

As long as you’re willing to replace it when it fails or are using it as a stop gap, i’m sure there wont be too many problems.

You can buy the Joint Stars High Pressure cleaning Gun From Amazon.

The Tornadors are expensive to buy and for some, confusing to setup. They leave the consumer with a whole host of questions, so I’ve compiled the most popular on the internet and tried to answer them as best as possible.

The tornador guns don’t require much power at all.

In-fact the Tornador Black can be run off of a 120V portable air compressor which is great for mobile detailers.

As long as you have a compressor that keeps a constant pressure between 5.5 – 6.3 Bar or 78 to 90 PSI, it’s good enough for the tornador.

Just make sure that the tank is maintained well, and the airlines that you use are 100% leak and kink-free.

I would personally recommend this Porter-Cable “6 Gallon Pancake” Air Compressor because it’s light, reasonably priced, and has a dial that allows you to regulate PSI output.

The bigger the compressor you have, the less likely it is that you’ll run out of air. However, you have to strike the balance between having enough air and having a heavy ass compressor to lug around.

In an ideal world, you’d have a detailing garage with a built-in compressor, but that’s a little overkill if I’m honest.

Just find a compressor that meets the requirements of the gun, and fulfills as many of your needs as possible.

Where does the Tornador dirt go?

The dirt particles that are blasted by the tornador are “atomized”. This means they break up into very small atoms and are released into the air.

I strongly recommend wearing a mask when you use this tool. It will help to prevent you from breathing in dust and dirt, as well as any cleaning chemicals you are using.

This also means that you should use the Tornador before vacuuming the car otherwise you’re just going to make the car dirty again.

You can get the velocity vac attachment or all-in-one system. However, this is more of a wet & dry vacuum than extraction for the Tornador.