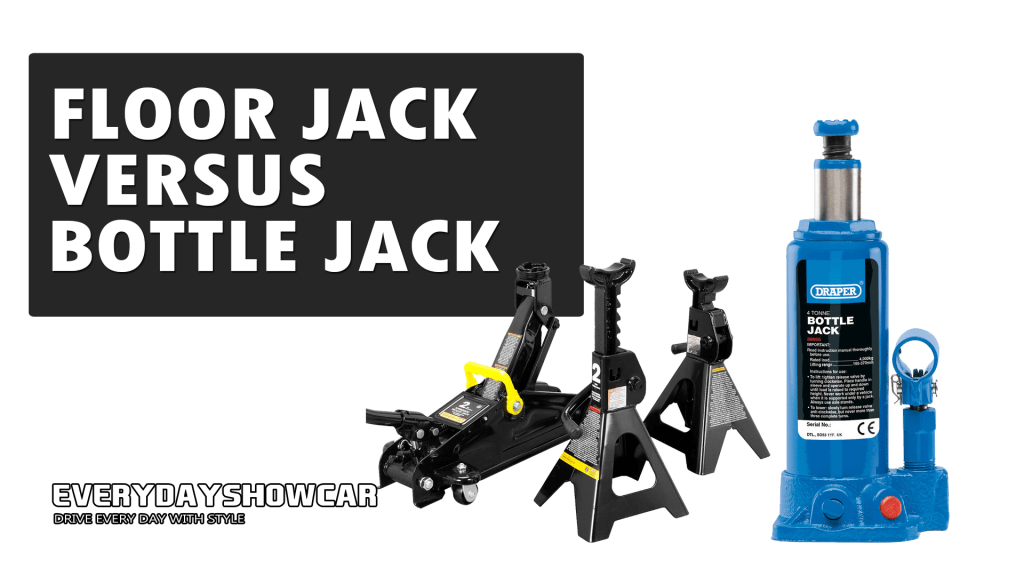 Hydraulic jacks are by far the most common lifting solution used at home, and even in the workplace.

In this article, I’m going to tell you about the types of hydraulic jacks, what to use them for as well as the advantages and disadvantages of using them.

There are two main types of hydraulic jacks that you’ll encounter.

I believe that you should use a floor jack whenever possible. They’re by far the best portable lifting solution going.

The other option is a bottle jack. These are less commonly used, but certainly have their place in the industry.

No matter which one you choose, both are able to lift a car. This will allow you to put jack stands underneath it, so that you can work safely under your vehicle.

Floor Jacks AKA Trolley Jacks, are by far the most commonly used type of jack.

While in most professional environments they have ramps, they’ll also have numerous trolley jacks.

I can guarantee, that they’re used to lift the car in most DIY/Homers too.

The piston in a floor jack is horizontal. This allows for a much lower entry point than bottle jacks.

Most low profile trolley jacks have a lifting range that begins at 3.5″. Regular jacks tend to begin 5.5″ from the floor.

The low ground clearance means that you can manoeuvre the jack underneath a car, placing it on one of the various lifting points and begin to jack it up.

As well as a much lower beginning point, floor jacks normally have a much higher lifting range.

Being able to lift the car higher will allow you more space to work, and more room for the axle stands to sit underneath.

Floor jacks are often available in two different sizes, small and large. Both can be very useful, though larger ones are obviously heavier and much less portable.

You’ll be surprised at how heavy floor jacks actually are, but, they’re still super easy to move around, thanks to their design.

Traditional Floor jacks sit on 2 castors and 2 wheels. The wheels rotate fully in a 360 degrees action, meaning you can push and pull the jack wherever you’d like.

Budget floor jacks start as cheap as $40-$50. They can be pretty intimidating at first, however, if you learn how to use a trolley jack properly, i’m sure you’ll never stop using it.

Bottle Jacks, not to be confused with a bottle of jack, are short and stumpy, resembling the shape of a bottle.

Unfortunately, bottle jacks are much less versatile and as a result are less commonly used.

Because the bottle jack lifts in a vertical fashion, they stand much taller than a floor jack.

This means that the lifting range of bottle jacks start much higher than even a regular floor jack.

After looking around, I found most bottle jacks lifting ranges begin around 8 inches and max out at 15/16 inches.

So if you’re using a bottle jack to try and lift cars that are lowered, good luck.

Bottle jacks are best used on vehicles that are raised a considerable amount from the ground. Think jeeps, suvs, work vans and even HGVs.

Thanks to its solid foundation, many bottle jacks are able to support up to 20 ton on their own. This is way more than a floor jack.

Like anything, if you use the bottle jack in the right way, or the right scenario, it’s going to be very very useful.

But! The average mechanic or DIYer will be better off with a floor jack than a bottle jack. Purely because of the cars that they’ll be working on.

Having the right tools for the job makes your life so much easier!

Here’s a simple animation that will help you to completely understand the way a hydraulic jack works.

It’s a very simple piece of equipment but you’d be surprised at just how many uses they have.

Floor jacks can also be used to lift and manoeuvre components around, specifically the fuel tank.

These jacks have become so popular over time because they come with many different benefits, but, like everything else in life, they also have some downsides.

Given the choice, I’d almost always choose a floor jack over a bottle jack. They’re just so much more versatile.

As you can see, there are some clear differences between the two.

It really depends on the type of work that you plan on doing. If you’re working on “light vehicles” then a bottle jack may be more suitable.

But, most people will be working on hatchbacks, sedans and suvs. Floor Jacks are better for these types of vehicles.